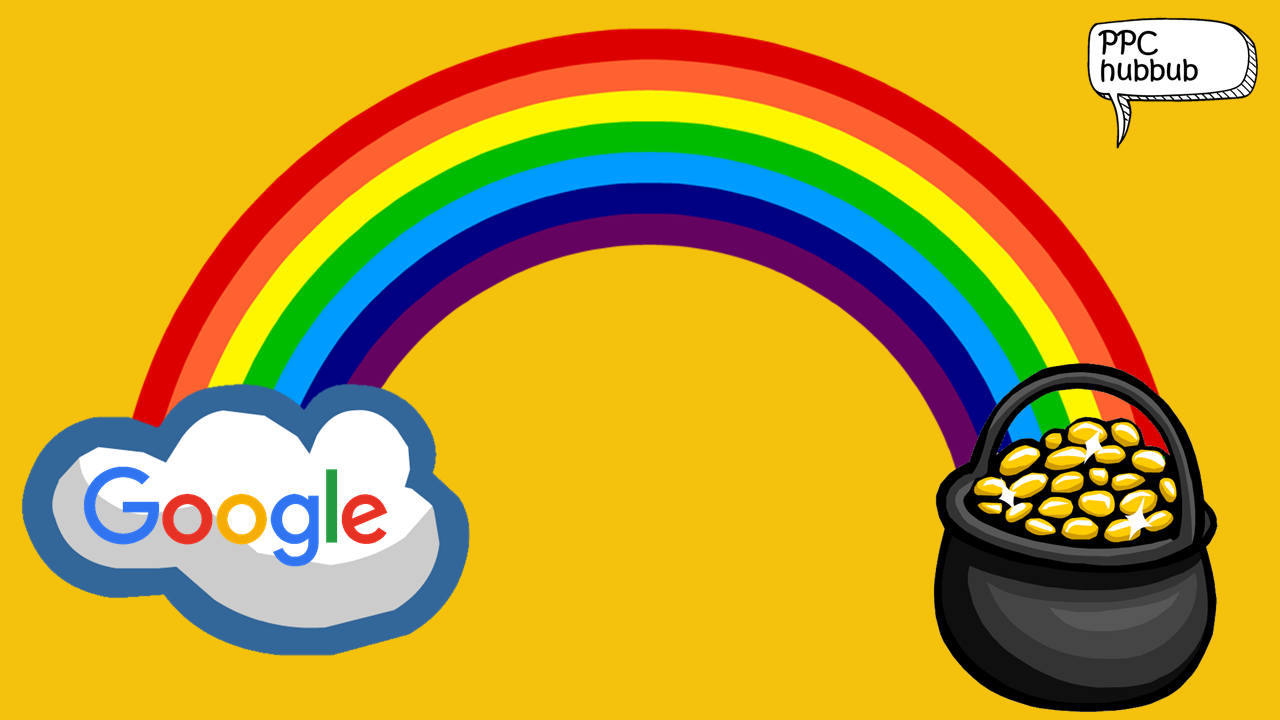 As Ron Burgundy once said; “That escalated quickly” and boy didn’t Google’s latest testing escalate quickly! It seems that Google have been testing every colour of the rainbow this week across the SERP, with very mixed reviews.

Why are Google testing the SERP colour? What does this mean for advertisers and users? We explore what this means for everyone, and as always we will share some actionable insight for your Paid Search strategies.

What Google SERP colours are being tested?

It might not sound like a big deal, but a slight change to the SERP colour like this could have a big affect on Google’s gold at the end of the rainbow

In fact, the Telegraph have shown that a few years ago when Google last A/B tested around 41 different shades of Blue links in the results page, is earned the company around $200 million (£138 million). Apparently, the slightly purple shade of blue was the best performing SERP colour at the time. How exciting.

But of course we know that Google are meticulous in it’s attention to detail, so it should come as no surprise that Google are testing even more SERP colours. And it seems as though they have found some more shades of blue to test with. Seriously, how many more shades are there?! 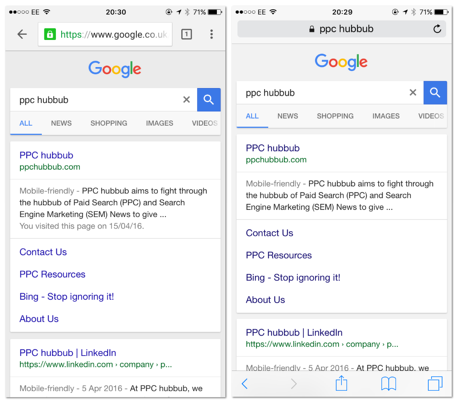 Above, you can see the 2 different shades that we spotted this week both on Chrome and Safari

On the surface, this probably doesn’t seem like a big deal. And for the colour blind, it’s certainly not a big deal. But, there is reason for every test that Google does after all.

As the week went by, it seemed that Google started to test an all Black version of the SERP 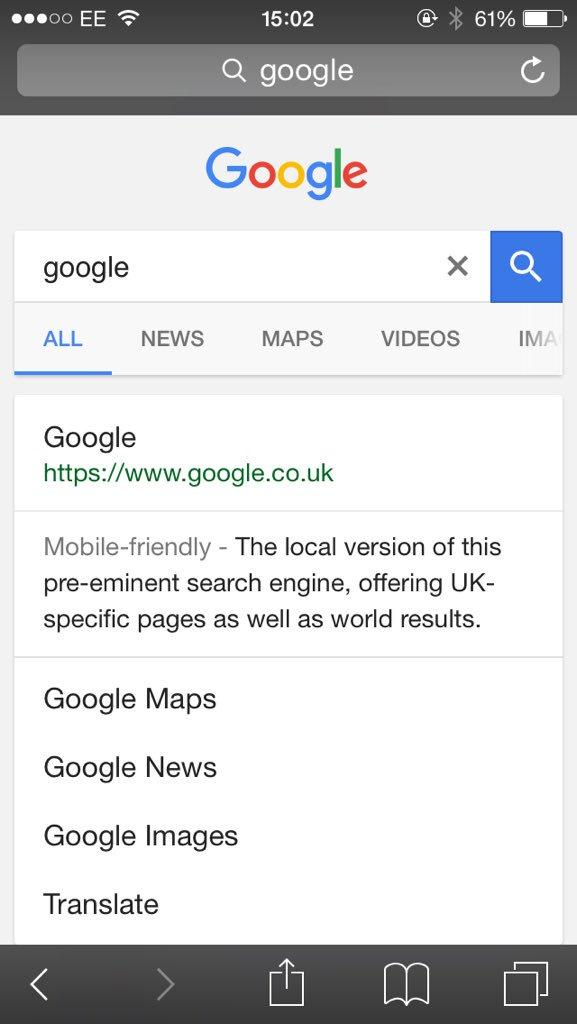 This particular test started the wave of anger from users. It seems like the majority hated it. Some complained that Google was no longer functional due to the fact that you can no longer tell (from looking at the SERP) which links you have already clicked on (blue changes to purple after it has been clicked on). Some suggested that it was now unclear where you needed to click in the SERP to get to site as the Meta Descriptions blended into the rest of the result. Others, probably didn’t care.

For advertisers using Paid Search, this is what the SERP looked like with all black links in the Ads vs Blue… 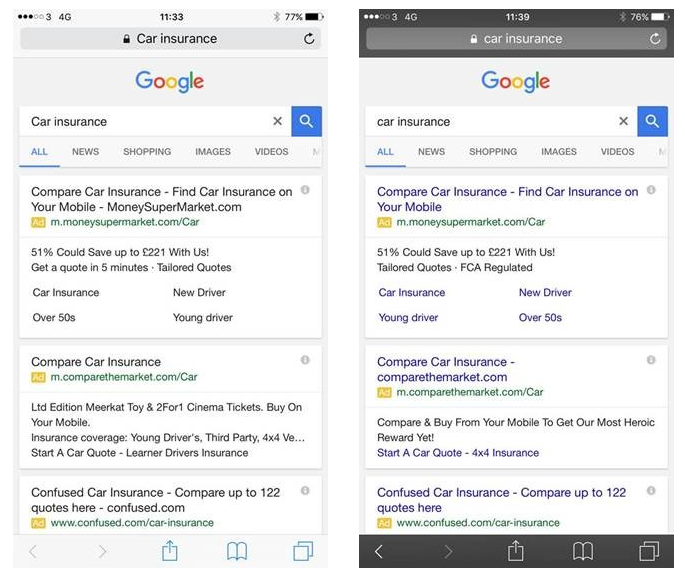 The biggest thing that stands out is that the Sitelinks just don’t really work in anything below position 1.

If we look at the 2nd ad, the ‘Start a Car Quote – Learner Drivers Insurance’ Sitelinks look much more like Call Out Extensions and I wouldn’t be surprised if CTR dropped on these Sitelinks as a result.

If these SERP colour changes weren’t enough, Google also decided to change the colour of the Ad button to the Display URL Green for 5% of users (up from the usual 1% for testing) 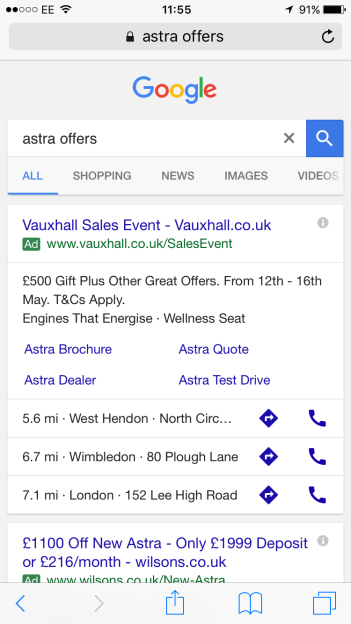 For PPC, this is obviously a change that will impact the most. By blending in the ad button to follow the same colour patterns as the text ad, there would be no doubt that this would be affecting CTR (most likely for the better). Why? Well, with this test there is less differentiation between the Paid Ad and the Organic listings. Making it look less like an ad is an obvious win for Google and Paid Search advertisers, but this could be a bit of a blow for organic.

Looking at the above, you can see how hard it might be for users to differentiate between a Paid Ad and an Organic Listing.

Users are highly demanding on this device; wanting these personal assistants to give them the answers they need – fast. Users on Mobile are impatient, but we know that Mobile users are more likely to scroll; whether this is a conscious decision to click on the organic listings over the text ad, or whether this is just a more natural trait that users have on their Mobile. Either way, could this slight change make it even more tempting for users to click on a text ad on Mobile if Google make it look more like a SERP without Paid Search presence? Therefore limiting the amount of scrolling needed to do on Mobile.

If Google can make these ad positions even more lucrative for advertisers on Mobile, surely Paid Search professionals will do even more so that they can to get to these positions – which will most likely lead to advertisers working to better answer the user’s query through more relevant ad copy and landing pages.

Remember, this is just a test

We could very well never see these appear again. Google have always, and will always, continue to test in such ways. Could this be a short-term test to top up the size of the pot of gold at the end of the rainbow, or a test with potentially long-term effects. However, what’s evident is that there has been a noticeable focus on testing the Google SERP colour this year.

We still have a few outstanding questions over these tests; what might this look like when applied to Product Listing Ads in the SERP? Is there anything that they can do to improve the presence of Sitelinks for some of these tests? Will Green ever become the new Yellow? Will users be OK with this?