Bid Adjustments For Each Device Type 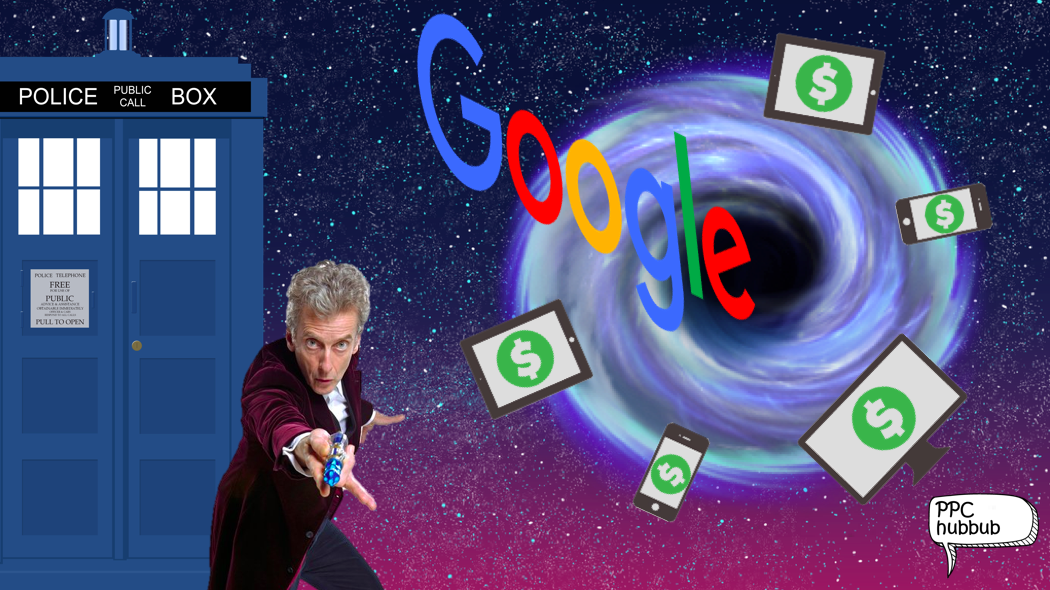 Google has looked into it’s past in order to preserve it’s future. At the Google Performance Summit 2016, they announced that we will now have separate bid adjustments ranging from -100% to 900% for Mobile, Desktop and Tablet. Let that sink in for a second…breathe…calm yourself…ok. Yes, that means more freedom (again) in the management of device level bid modifiers. We will soon (again) be able to bid on Desktop, Tablet and Mobile separately.

So why have Google gone all “Doctor Who” on us and travelled back in time to a place where we had greater control over device bids?

We will be exploring this below, and as always we’ll give you actionable insight for you and your Paid Search strategies.

Before 2013, we were able to build Paid Search campaigns to target specific devices separately e.g. Desktop, Tablet, Mobile. This therefore allowed us to bid more aggressively on Desktop as opposed to Tablet, as an example. But, this was difficult for Paid Search professionals to manage as it effectively tripled the size of accounts and therefore workload. For Google, this was obviously a problem as it could mean less revenue. They therefore needed to simplify and smarten the way Adwords campaigns worked.

Enhanced Campaigns was meant to future-proof Adwords, but advertisers are increasingly frustrated about the fact that Desktop & Tablet performance are not as similar as Google predicted. Today, this is still the case for most advertisers; there has been a decline in Tablet stats, and currently there just isn’t a way to optimise Desktop & Tablet bids separately.

Enhanced campaigns also “forced” advertisers to start testing Mobile Ads more seriously. Google saw that this device was becoming a game changer, and it wanted to ensure that advertisers were capitalizing on this trend.

The growth of Mobile in particular has now exploded, which has changed the game for advertisers and Google. Yes we are still in a multiple device world, but Mobile is now the number one device that we turn to for everything with all other devices being secondary. In no less than 3 years, we find Google future-proofing Adwords again…

In May 2016, Google announced that they will be allowing us to have effectively 3 device targeting (Desktop, Tablet, Mobile) options rather than the existing 2 (Desktop & Tablet, Mobile)…again.

According to Sridhar Ramaswamy (Senior Vice President, Ads and Commerce at Google), “This lets you anchor your base keyword bid to the device most valuable to your business and then set bid adjustments for each of the other devices. You will also have a wider range to adjust bids, up to +900%” (Source: Google Inside Adwords).

With Enhanced Campaigns we are currently only able to set a base bid for Desktop & Tablet, and then use a bid adjustment for Mobile (-100% or +300%) from this set base bid.

Example – I can now anchor Mobile to have my base bid, and then use bid adjustments (either positive or negative) to bid more strategically on these other devices (Desktop and Tablet separately).

Why are Google going back in time to secure it’s future?

Throughout the announcements at this year’s Google Performance Summit, Google reiterated that they have listened to advertisers feedback about their products and have actively ensured that we are being heard through the updates. Updating the way that bid adjustments are carried out in Adwords has certainly proved this. Advertisers have been screaming out for something like this for a while now, and the pleasure was audible at this years summit when it was announced.

Even though Google have looked to their past to ensure their continued successes on Mobile for the future, we believe that this is a step forwards and not a step backwards. It’s an Evolution, not a Devolution.

When is this going to happen?

Google say that this change will happen in the next few months, but haven’t as yet given a specific date. Keep your eyes peeled on our Social Media to find out more!

As mentioned, you don’t need to action anything just yet. However, we would recommend that you start thinking about optimisations and plans for the near future.

All in all, we are super excited to be able to have this level of granularity back in our campaigns. For some, it could be seen as an admission by Google that their “coupling” of Desktop & Tablet through Enhanced Campaigns was a mistake. We disagree. Let’s remember that there was a time where some advertisers were sceptical of Mobile and were not willing to invest much into the device. For some, this is still the case – but the overall majority is that Mobile needs more investment. As with all of Google’s updates this year, this is yet another win for their Mobile growth strategy. What do you think?