We think that you should be taking Bing more seriously as part of your Paid Search strategy.

Bing campaigns can often be treated in the same way as a long distant (slightly annoying) relative; most of the time you choose to ignore them, or you only check in with them if it’s a life or death situation.

Yes, most of your time will no doubt be focused around optimising your Google campaigns which doesn’t really leave much time to do the same on Bing. But we are here today to tell you that this is wrong!

On top of the most obvious benefits that are usually thrown around (see some here) e.g. market share for Bing on the rise, better performance at a cheaper cost (don’t forget that this is mostly because there is less volume vs Google) etc. we thought that we would take you through some recent announcements and see what other benefits this could bring us in the future.

In April 2015 Bing and Yahoo announced that they would be going down separate paths (5 years into a 10 year contract). This year, Microsoft announced the Bing Network…

Their focuses this year are Mobile, Local, Global, Personal, Predictive, and in the moment.

It’s no secret though that Windows has been struggling recently on Mobile when competing with iOS and Android. Nevertheless, it has been slowly trying to push through the boundaries by expanding Bing’s footprint through syndication with Spotlight Search (Apple), Siri and Amazon Devices.

It seems to be a fresh start for Bing, where they are moving forward and forging strong synergy between their own products (Windows, Xbox, Cortana) and with other partners such as AOL (more here). This syndication will mean more data gathering to help speed up it’s wider availability of Audience & Demographic targeting (finally launched in October 2015).

Of course, this data will also help to make it’s AI experience a lot smoother on Cortana. This week Microsoft set out it’s vision for Cortana and other bots to become the ultimate butlers…hopefully the butler won’t be as racist as it’s recent Tay Bot experiment via Twitter.

On top of all of this, we can clearly see from the 2016 roadmap that Bing are investing heavier in their Ad buying platform. The need for this has recently been evident after the up to one week outage that some advertisers saw with Bing reporting (see Search Engine Land, 2016).

But what does all of this mean for your Bing strategy?

After this rocky patch for Bing, it can’t get any worse right? Cough.

Looking at the roadmap for Bing Ads in 2016, we can’t help but feel optimistic. Below we will attempt to dissect some of the things we know Bing Ads are going to be working on throughout 2016. As always, we will be exploring what this means for you and your Paid Search strategies too…

This is a longer term plan for Bing >3 months or more, but one to be aware of…

App Install Ads – promote your app in the ad without the need for a website. Add a “Get” button to your ads.

Bing Shopping Campaigns will replace Product Ads (April 2016) – feed-specific campaign type used to manage your Product Ads will become available in even more markets. Will we see it on Mobile too? 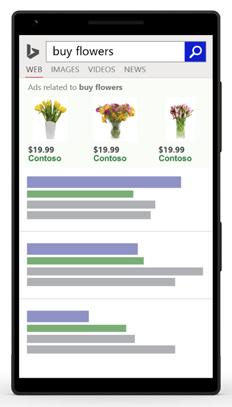 Bing doesn’t sound so lame any more eh! Who’s with us?